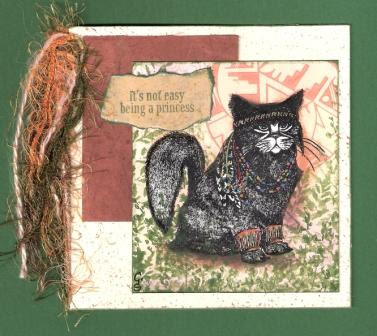 Pocathontas
This little princess looks so regal in her headband
and beads.
My play on words of course comes from Pocahontas,
later known as Rebecca Rolfe.
She was the daughter of a Virginian Indian Chief named
Wahunsunacawh. He was better known as the Emperor
Pohatan who was the head of a tributary tribal nation in
the Tidewater region of Virginia. These tribes made up
what is known as the Powhatan Chiefdom and spoke the
language of the Algonquian family.
Pocahontas is said to have saved the life of colonist,
John Smith from being executed by a group of
Powhatan hunters. You can read more about
Pocahontas in this article.
This is my royal entry to the Stampsmith and
Gingersnap Creations as well as Dezina World
themes for this week.
Posted by Cynthia Schelzig at Thursday, February 10, 2011

She may be the most beautiful kitty tha tI have seen! Love what you did with this card!

The words really fit the image of the cat!

hahaa, she looks marvelous, what a great card you made. best wishes from janine

What a wonderful princess!
My cats have commented "Miaoooooooo":-))))

It's so lovely, Cynnie! xoxo

This is wonderful, Cynnie, the cat is adorable!!

Ohhh what a beauty, love that headband. thanks also for the fab info on Pocohonas.
Thanks for joining in the challenge this week. the winner is announced today and a new challenge will be set
hugs June

I am lol at the headband. Just great Cynnie.
Lynne x

Love this Cynnie its a fab card, thank you for playing the Gingersnaps Challenge. Annette x

Oh, Cynthia, this is just too cute for anything! Princess Kitty...I love it! :) Thanks so much for joining us in our 'Royalty' challenge over at The Stampsmith Challenge and good luck in the draw! :)

What an adorable entry for the Royalty Stampsmith Challenge! Well done! Thank you so much for playing along again!
Cheers,
Val :)

Very funny interpratation of the challenge theme! Love the background stamping and the fibers. Thank you for joining us at the Stampsmith Challenge blog! Have a great day.

There's nothing quite so regal as a cat is there lol. Your card is lovely x

Oh it's so funny and cute! Never expected a Pocahontas like this !

CUTE! That cat stamp is too funny!

I am in love with your cute kitty. He/she looks so serious in all his regalia

Hi, my name is Cynthia Schelzig.
Welcome to Galerie 46.
My blog reflects my interests in Watercolor, Acrylics, Collage, Drawing, Mixed-Media, Bookbinding, Photography, Stamping, Architecture and Design as well as highlighting some of my favorite art books or an accomplished artist.

SEE MY LINK LISTS BELOW....

Scroll down to find interesting
Websites and Blogs .....from
Painting to Bookbinding or
Photography to Interesting
Art.

Come join in the fun! 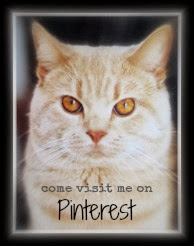